Crossing the Atlantic in a Projection Room

All at sea with a Digital Cinema In November 2011 my wife & I were treated, by some very good friends, to an Ocean Liner passage from New York to Southampton on Cunard’s magnificent Queen Mary 2. Queen Mary 2 is, I understand, the only passenger ship plying the North Atlantic route non stop, a voyage of seven days on the world’s largest ocean liner. (A few cruise ships are larger, but are not designed for high speed non-stop ocean passage). 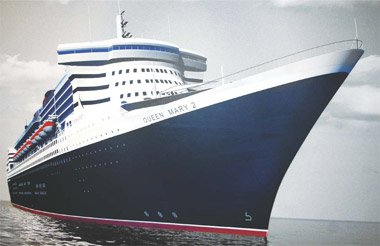 The ship is a world in itself, carrying up to 2600 guests in the luxurious style of a bygone age, with a crew of about 1300. Amongst the treats on board is a 475 seat Cinema, ‘Illuminations’, complete with a full digital projection system. The cinema is towards the bow, and occupies three of the fourteen decks in height and about three quarters of the ships width.

Wrapped around the outside of the Cinema is a wide walk-way which I would call a Hall of Fame, as its walls are covered with photos of film stars on board the ship’s predecessor, Cunard’s Queen Mary, now a permanent exhibit at Long Beach California. 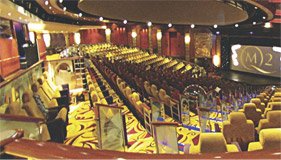 Senior Production Manager Courtney Cook was kind enough to let me “tour” the projection booth, where I met Ramil Ayag, the ‘Illuminations’ Technician and Projectionist, and Damir Blazevic, a 2nd Electronics Officer. Damir’s duties include looking after the technical side of the Cinema.

Interestingly, the Illuminations Cinema is also used as a lecture theatre and, uniquely, it can be set up as a Planetarium.

In the beginning - film and digital...

When built in France in 2004, Queen Mary 2 was on the cusp of the Digital Cinema age and was fitted with two Christie 512 Digital projectors and an Ernemann 35mm projector, all fitting into a compact projection booth that also serves as the control centre for lectures and the Planetarium. The Ernemann projector still sits at the back of the projection booth, on rails that could guide it into a forward position by the projection ports, but this has never happened according to Courtney Cook. And now never could, as one of the Digital projectors is bolted down over the Ernemann track! So if you ever need a 35mm Ernemann projector, there is a brand new well travelled one on this ship. Interestingly, there was a small 35mm rewind table with about 200 ft of film on it, but I guess that was just for show!

The cinema’s main show screen is around 13 metres wide and, being a silver screen for 3D, was apparently a nightmare to get on board. It could not be bent or folded and was too large to be loaded at deck one level where all large items come on board. It had to be craned directly to a higher deck and I think Ramil said a special ‘opening’ had to be made to load it onto the ship.

The screen is now illuminated using NEC’s NC3240S-A 4K projectors, each with 9kW lamphouses, running at 108 amps, seemingly regardless as to whether 2D or 3D is presented. These projectors only recently replaced the Christie 512s, which, according to Courtney and Damir, were worn out! Below the projectors are mounted GDC 3D servers. The ship runs Real D for 3D presentations. Currently these servers are also used for 2D, but the projection booth has just been fitted with a PC system which will, in future be utilized for 2D projection. All material is taken off hard disk, both Features and Alternative Content. Dolby 7.1 surround sound is standard. Several seating areas have audio loops for the hard of hearing. There is, to date, no audio description system in the cinema. 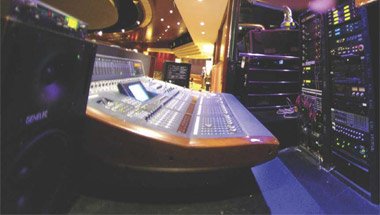 For the North Atlantic 7 days out and 7 days return run, 14 feature films are provided with showing rights as and when Cunard wish! There is I understand no direct ship to shore link with the distributors, although the Internet is available, if somewhat slow, on board. The ‘Illuminations’ cinema runs feature films twice daily, interspersed with popular lectures, such as the history of various film stars and authors, further interposed with varying Planetarium presentations. Alternate content is included, and on our voyage a three hour version of ‘Carmen’ was projected. When used as a lecture theatre the main screen curtain remains closed and a smaller screen is lowered in front of the curtain on the right of the stage. One of the NEC NC3240S-A projectors is used to illuminate this smaller offset screen. During lectures the main control desk, just outside the projection booth, is used for audio, projection and lighting control.

When ‘Illuminations’ is used as a Planetarium, a local disc-shaped area of seating is utilised below a planetarium dome. This seating is red colour-coded with fully rear-tilting seats under the dome. The planetarium dome, when in use, is lowered through the cinema ceiling. Projection is via six synchronised Planetarium projectors (in perspex domes, detail shown below) using Deiniti® projection technology. The projector positions are indicated by circles on the photograph. The experience matches other planetariums I have seen and is remarkable in being, I understand, the only floating Planetarium in the world.

It is fascinating to be in a full-size cinema thousands of miles from land, with maybe 5km of water below. There of course is no limitation of power to the cinema booth, as the ship generates around 120Megawatts from its diesel and gas turbine generators, of which a good proportion goes to the electric pod motors that power the ship at around 24 knots across the Atlantic. But there is plenty of reserve for all other electrical requirements. During five of the seven days of the voyage when we were well away from land, we never saw another ship nor any aircraft vapour trail; it was just 4000 people alone on the Ocean, and yes, we crossed very close over that most famous of all Cunard / White Star liners, the Titanic.