Startpage \ News \ NEC Display Solutions lifts the curtain on the future of cinema at Cin . . . . 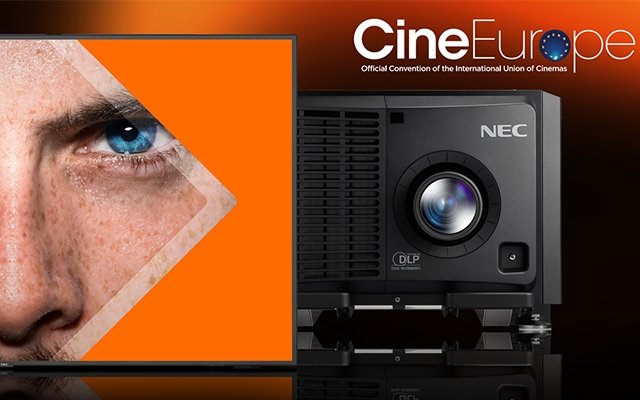 Munich, 5 June 2019 – NEC Display Solutions will be attending CineEurope in Barcelona from 17 – 20th June to showcase the latest digital display technologies for cinema and highlight the latest case studies of venues that are bringing the magic back to the movies.

The EU cinema industry has experienced a sharp decline in box office revenues, with takings falling by 3.3 per cent in 2018 – a decline of over €230 million compared to 2017 – as the sector struggled in the face of competition from on-demand and streaming media.

Cinemas are fighting back, however, by investing in new technologies that are focused on creating a stunning audience experience not just in the auditorium but throughout the premises.

NEC will be demonstrating how its technology is contributing to cinema’s renaissance, including the company’s new modular NC2402ML projector – the first cinema projector that integrates a modular laser light system with a projector head. The device enables cinemas to deploy stunning, pin-sharp laser imagery, and uses a modular approach which enables cinema venues to plug-in the appropriate light modules based on the required brightness.

The new NC2402ML projector is also noteworthy for featuring new financing options, known as “Light as a Service”, whereby operators can lease a device to lower their CAPEX while guaranteeing constant brightness output. In the rare event of a fault, failure or reduction in brightness, a replacement laser light source is provided immediately.

In Suite C, NEC experts will be on hand to discuss how cinemas are reinventing themselves to attract a new generation of moviegoers. Aside from showcasing the latest RB cinema laser projectors, NEC will be demonstrating how cinemas are creating an impressive, immersive experience throughout venues with wall-mounted and table-top touch screen displays, impressive video walls and direct view LED digital signage.

Highlights from the show will include:

“Cinemas face unprecedented competition in many territories across the world,” said Alain Chamaillard, Head of Cinema EMEA and CIS at NEC Display Solutions Europe. “For example, in 2017 movie attendance hit a 25-year low in the US, and figures for the EU are scarcely more encouraging.”

“The key to kickstarting a renaissance in cinema is to concentrate on making moviegoing a special experience again. Auditorium technologies like 4K and 3D are obviously important, but so is creating a unique experience throughout venues. That’s why we’ve seen the rise of new viewing experiences, from the immersive Secret Cinema concept, to “gourmet viewing”, to the Hot Tub Cinema.”

“Using the right display technology can transform the cinema experience – for example by enabling moviegoers to order tickets and snacks from touchscreens, to watch high-resolution film trailers in the foyer or in the auditorium while they wait for the film to begin, and creating breathtaking video walls. We look forward to meeting attendees at CineEurope 2019 to discuss how cinemas are bucking the trend to create memorable experiences for everyone.”

NEC’s technology is used in some of Europe’s most forward-looking cinemas – to learn more about the NEC Digital Cinema Solutions or to arrange a visit or a briefing, please contact the press office.

Follow us on Twitter at @NEC_Display_EU to keep up-to-date with all NEC Display Solutions news in EMEA. To find out the latest from the event, keep an eye on the hashtags #CineEurope2019 and #CineEurope.