Hartwall Arena is the number one multifunctional arena in Helsinki, Finland. During a major renovation and face-lift of the Arena hundreds of NEC displays were installed to improve service level, comfort and energy at the venue.

Hartwall Arena opened in 1997. It is a host to ice hockey matches, large concerts, boxing fights and many other major events, and was also the stage for Ice Hockey World Championship matches in 1997, 2003, 2012 and 2013. As ownership changed hands in 2014, the glorious stadium was due a major renovation, in order to ensure the audience of up to 15,000 people enjoy seeing everything that takes place on stage.

The grandstand of the arena is framed by three stories with the corridors holding restaurants and refreshment areas. Excellent AV technology sharing what’s happening on stage means spectators can leave the stand during an event, grab a snack in the restaurant at any time, and still be kept updated on what is happening on stage.

Hartwall Arena has over 900,000 visitors a year, mostly men between 25 and 55, which represents huge potential for advertising. Information displays and functioning digital advertising screens were requested besides the event displays as well. The in-house restaurants and other service providers also wanted to use digital signage displays to promote their offerings. 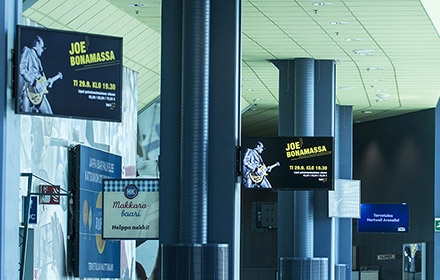 NEC dealer iConnect was selected to manage the project, offering the competence to realise the complicated content creation, management and distribution system.

“During the renovation the situation was occasionally pretty chaotic and it was of the utmost importance that everything was taken care of smoothly,” says Kimmo Kivisilta, CEO of Hartwall Arena. “We had our hands full with lots of things, from acquiring an ice machine to taping the walls. Both iConnect and NEC managed the implementation and took care of their tasks and everything was ready on time for the KHL League opening in 2014.” 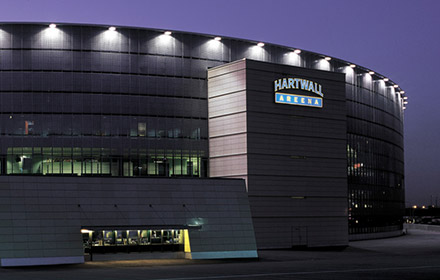 The solution comprises three types of display: individual displays, small video walls consisting of three displays, and large video walls with up to 16 displays, of which the largest is welcoming the audience by the main entrance.

The display contents were divided into three categories: an informative guidance system which is easy to change for different event types, entertaining content, and advertorial content showing service offerings from inside the arena and other advertisements targeted for the audience of individual events. The content on the different displays can be uploaded in various formats, including live-streaming. Most of the content is hosted in a virtual cloud and distribution of the signals is realised with fibre optics around the whole building. There is also one person employed exclusively for designing the content and taking care of the distribution during the events. 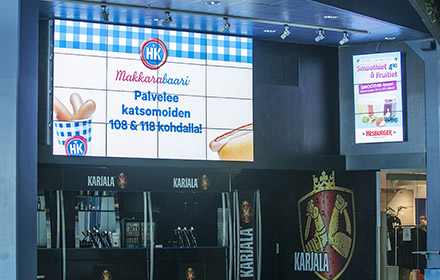 Since 1997, Hartwall Arena only featured fixed advertisements. The change to lively and versatile state of the art digital signage has changed the atmosphere for spectators and increased the income from advertisement sales.

Kimmo Kivisilta concludes: “We have received many messages of thanks from our regular visitors that we have invested in the renewal and that the image quality delivers the energetic atmosphere we needed. Growth of revenue in service offerings has been on expected level and encouraging.”