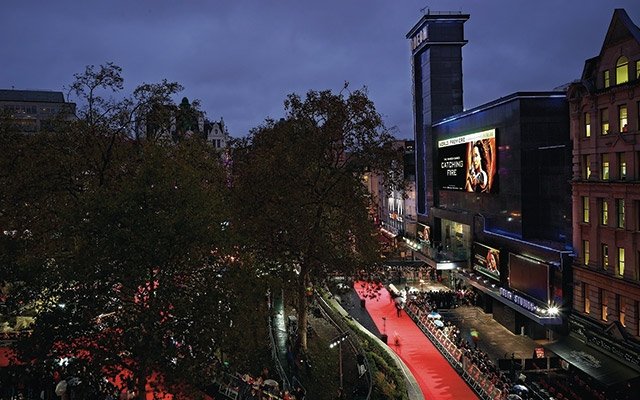 12 November, 2013 – Sharp NEC Display Solutions Europe and ODEON have installed one of the largest displays of its kind in a public square – an LED digital display measuring 107 square metres – on the facade of the ODEON Leicester Square in London’s West End.

The huge display – the size of half a basketball court – replaces the old poster board and is flanked by two 18 square metre displays in one of the UK’s most prominent locations, which welcomes more than 90 million tourists every year.

The trio will display images for the latest movies and, during events such as premieres, live footage including celebrity interviews and clips will be screened for the passing public to view. Officially launched at the world premiere of The Hunger Games: Catching Fire , the displays bring a highly engaging instalment to London's iconic West End.

The installation of the new screens will allow ODEON Leicester Square to instantly change what the screens display, eliminating the need to regularly hire traditional ‘cherry picker’ lifts to change what is displayed on the poster boards, making the screens a more environmentally friendly alternative to displaying posters.

The new screens will also enable the display to divide into multiple screens, allowing ODEON to screen different content simultaneously, a feature which will be particularly utilised during premieres where live film footage of the red carpet can be screened alongside clips of the film.

“Of course, a project of this scale breaks new ground and brought several challenges. Weighing in at several tonnes, the main screen had to be built off-site and installed in three separate stages. Getting uniform colour consistency of images across a display of this size is also a major achievement. This is where NEC’s long heritage in public displays really came to the fore,” adds Jackson.

This project reinforces NEC’s longstanding relationship with ODEON, which has also seen all of its theatres across Europe upgraded to NEC digital cinema projectors over the last five years, ensuring that ODEON can deliver the quality experience modern film enthusiasts expect. It also heralds the ongoing extension from the projection room into front-of-house, with planned projects to bring more digital signage and self-service kiosks into theatres.

Leicester Square underwent significant redevelopment in the run up to the London 2012 Olympics, enhancing its function as a backdrop for film premieres while retaining the Square's historic character. The new screens further this redevelopment, bringing together the heritage of ODEON's long-standing presence in the square with the most impressive and engaging display possible.

NEC Display Solutions Europe GmbH has its European headquarters in Munich, Germany and is responsible for all business activities in EMEA. NEC Display Solutions benefits from the technological know-how and technologies of the NEC Corporation and, with its own Research and Development, is one of the world's leading manufacturers offering the widest product range of display solutions in the market. The display product portfolio ranges from entry-level to professional and speciality desktop LCDs, via large-size Public Displays for Digital and Retail Signage. The Projector range offers products for all needs, from portable devices via business projectors to products for permanent operation (such as PoS applications) and digital cinema projectors. Bernd Eberhardt is President and CEO of NEC Display Solutions Europe.

Further information can be found online at: www.sharpnecdisplays.eu

NEC Corporation is a leader in the integration of IT and network technologies that benefit businesses and people around the world. By providing a combination of products and solutions that cross utilize the company’s experience and global resources, NEC’s advanced technologies meet the complex and ever-changing needs of its customers. NEC brings more than 100 years of expertise in technological innovation to empower people, businesses and society.

Notes to Media:
For media enquiries contact the ODEON Media Centre on 0845 070 2852 or email odeonteam@redconsultancy.com